The North Shore Bridges of Kamloops

This article written and researched by M. Colleen Stainton. Images reproduced with permission of the Kamloops Museum and Archives. Hover over image for photo credits, or see the list at the end of the article for the image notations in order of appearance.

Three successive bridges built over the Thompson River have each symbolized the history and development of the North Shore of Kamloops.  Each bridge was the outcome of considerable pressure on the governments of the time by the area residents to ensure both transportation and economic development. Remnants of the first two bridges can be seen west of the current Overlander’s Bridge.

Before a bridge existed, the Thompson River could only be crossed by canoe or raft. Farmers and ranchers on the north side of the Thompson River had to get their grain, cattle and other produce to markets in Kamloops by making a long trek to a ferry at the west end of Kamloops Lake, then backtracking east to Kamloops. For a short time, crossing the river in winter could be done when the ice was hard enough. This ferry was operated by Francois Saveneux, for whom Savona is named.

The CPR reached Kamloops in 1885, creating access to more markets and increasing the need for better transportation. In response, a government ferry was started that year running from the foot of Hudson Bay Trail to the north shore to improve access.

The ferry consisted of a rowboat for small loads of passengers and a scow, or barge, for larger loads, horse teams and other livestock. The cost was 25 cents per passenger, 50 cents per horse and $1 for a team. As Kamloops grew, so did complaints about the ferry service being inadequate.

The ferry was neither profitable nor reliable and unable to run during the winter or high water. Loss of cargo, accidents, and increasing traffic were cited in editorials. Many public meetings, petitions and delegations to Victoria pressured the Government for a bridge.

Attempts to make the ferry viable by Jean Laveau, George Loney, Alex McLean and W. Bunbury were unsuccessful.  Alex McLean himself lost several colts during a crossing. In 1892, he noted that from Black Pines they had to cross the North Thompson by scow and reach Kamloops via the Red Bridge (built in 1887) which was not possible when ice was forming or melting.

In February of 1884, engineers Keefer and Smith were contracted to study bridge possibilities. They chose a site where the frozen river was narrowest but could not measure velocity of flow through the ice. Deep pile foundations with Howe trusses were recommended to be sheathed in 3 inch planking with a triangular ice-breaker.

The estimated cost of $44,802 was considered exorbitant by MLA, G.B Martin, the Chief Commissioner of Lands and Works. Instead, he gave an annual $900 to subsidize the ferry! Alex McLean won the contract but the service delegated to his sons did not meet local needs.

Petitions, letters and lobbying for a bridge continued. A petition signed by 90 ranchers was sent. The new Board of Trade (now Chamber of Commerce) joined the outcry but all were rejected by Government.

In 1897, the Kamloops newspaper reported” a promised bridge has not materialized. We know that the present excuse is lack of funds, but we cannot accept it as a reasonable one,” adding that if government managed funds better, the estimate of $44,000 should not prevent the construction of “so necessary a public work,” (The Sentinel, Feb 26, 1897). In 1898, the resistant Martin was defeated by F.J. Deane, the editor of the local paper.

In 1899,  the local newspaper reported, “ the citizens of Kamloops are now semi-officially informed that if they want a bridge at all to communicate with the west side of the North Thompson River, it is to be placed some miles up, so that it will be of as little use as possible to the city. This is a distinct insult to Kamloops … Mr. Deane has so little influence that he is told to shut up whenever he importunes the Lands and Works Department for our rights …. The bridge was asked for below town by both Mr. Deane and everybody in the district,” (The Kamloops Standard, March 16, 1899).  It was argued that building a bridge on the North Thompson and maintaining a ferry below town would be more costly than building a bridge across the Thompson River.

In the meantime, in May, 1898, tenders had been called to supply and deliver piles for the “Kamloops Bridge.” The same year, F. J. Fulton defeated Deane and he was subsequently credited with the January 1901 $20,600 contract for the steel superstructure.

Steel beams were transported to Kamloops by train. In March, progress was slow. At one point, a fistfight broke out between the contractor Bains and Patterson, his foreman. It was stopped by the ice breaking under the combatants!

A joyous, unofficial and temporary opening took place at 5:40 pm on Sept 23, 1901, prior to the Sept 25th opening day of the annual Kamloops Agricultural Association’s Exhibition in Alexander Park. It included a procession led by the Association’s President Mr. W. J. Roper and William Fortune, who drove his rig in both directions across the bridge.

Champagne was served and the bridge was named” The Kamloops Bridge.” Contractor Bains was thanked for getting the bridge finished enough for temporary use during the three-day Exhibition. Previous exhibitions had required the hiring of a steamer for transport across the Thompson River.

An unpainted wooden bridge with a steel swing opening for boats was completed by the end of October after the centre pier of the bridge was filled with 1,262 cubic yards of rock on October 15.

During the official opening, it was named “The Thompson River Bridge” The north shore road off the bridge was named Bridge Street, (now Palm Street.)

This Thompson River Bridge was later painted white and became known as the “The White Bridge.” It led to the 1904 development of the Canadian Real Properties colony known as Fruitlands. That year, a spark from the steamer, “Riffle,” was thought to be the cause of a fire on the bridge. A Japanese bucket brigade from the north shore saved the bridge and repairs allowed the bridge to function for two more decades. 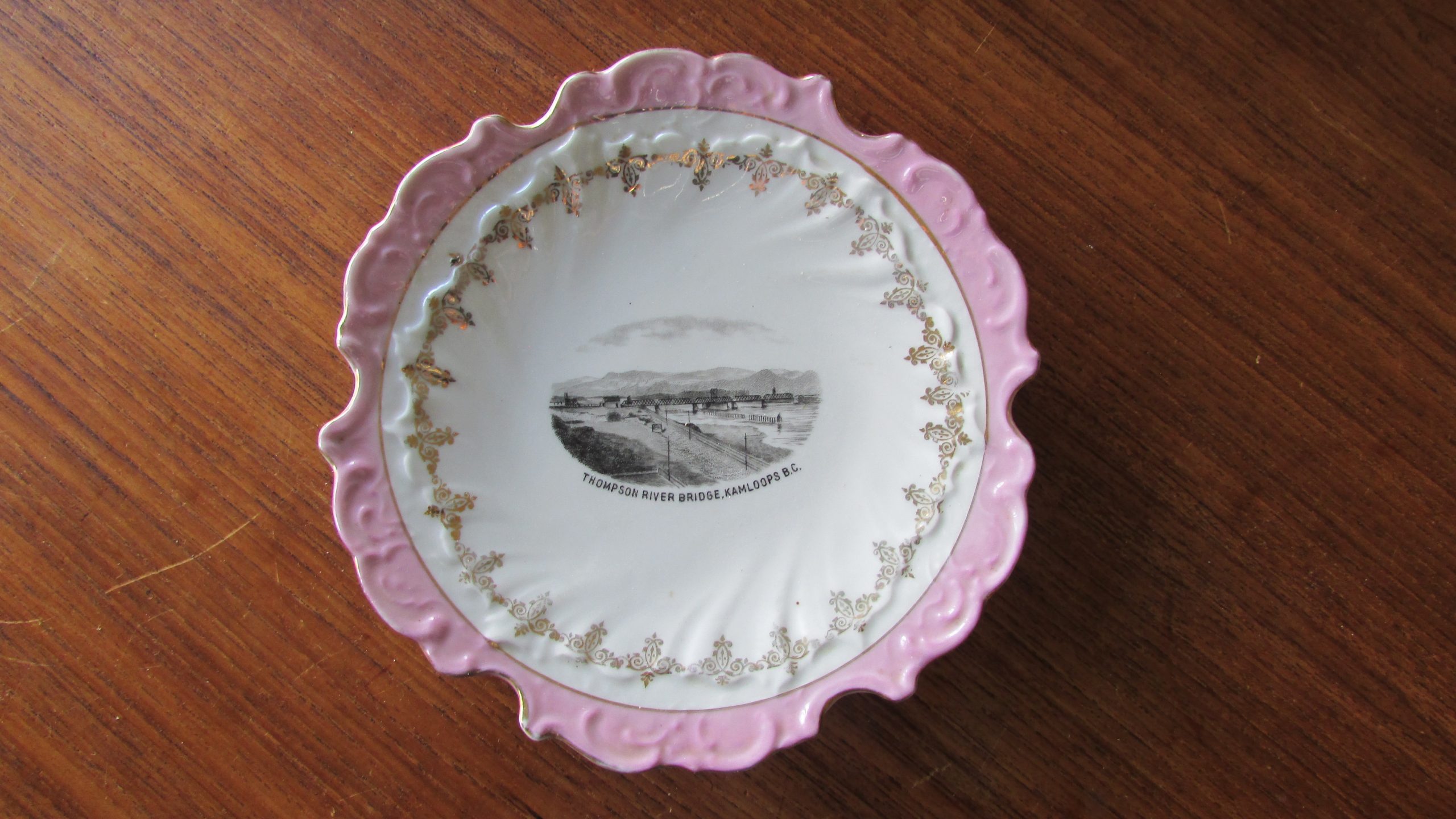 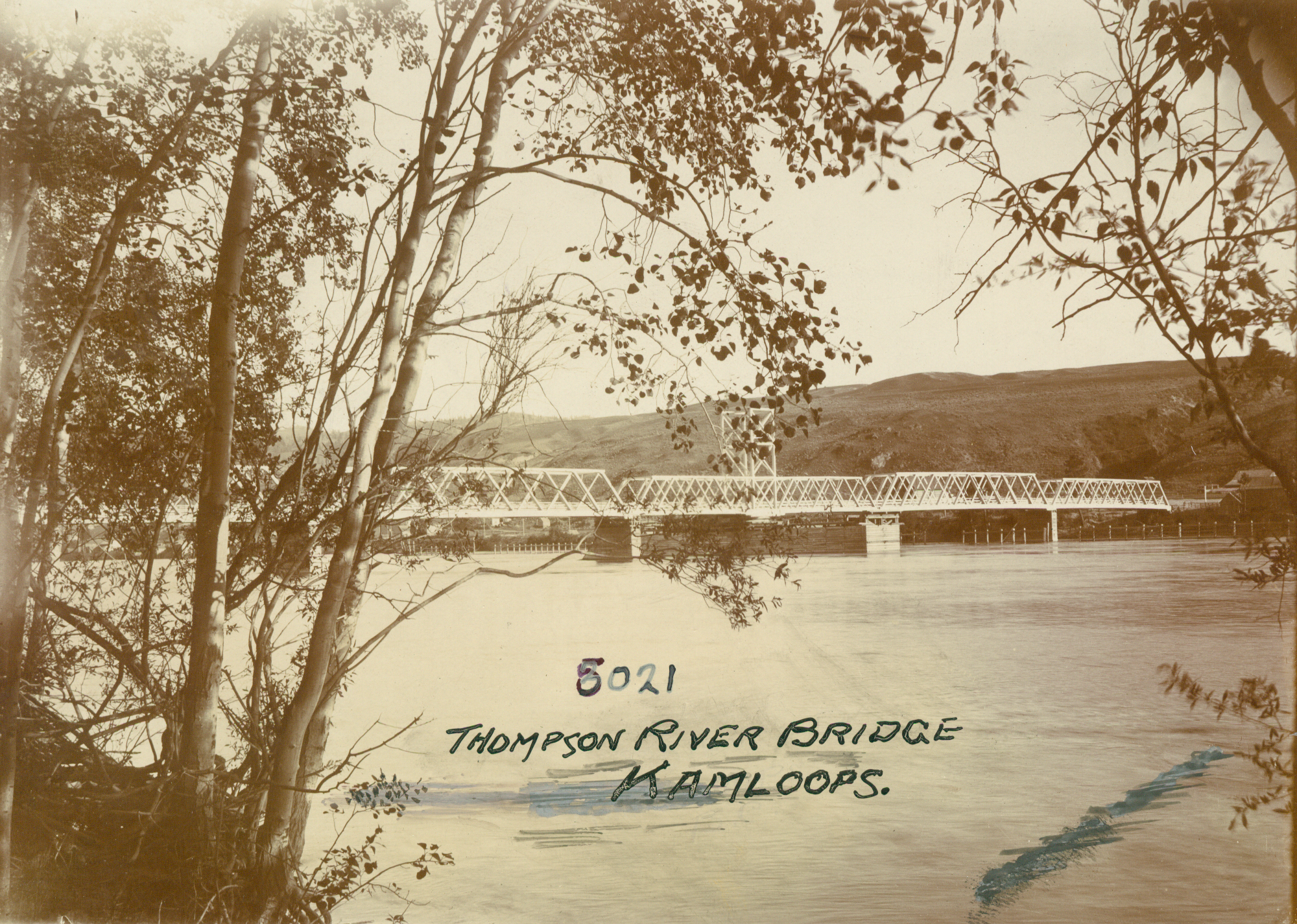 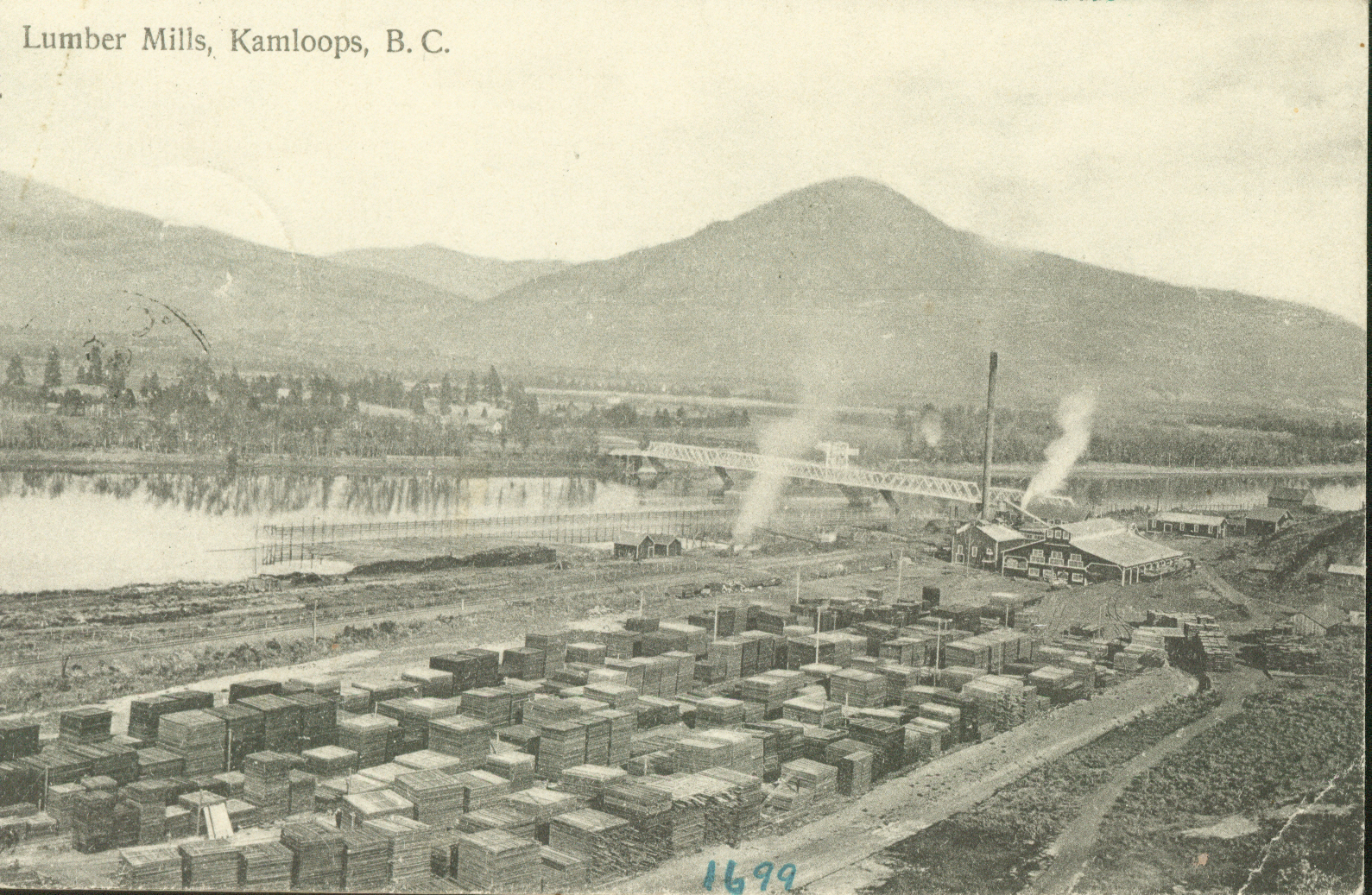 At low water, both shores reveal remnants of the original piles. A buoy in the center of the river alerts boaters to foundations still lying below the surface. 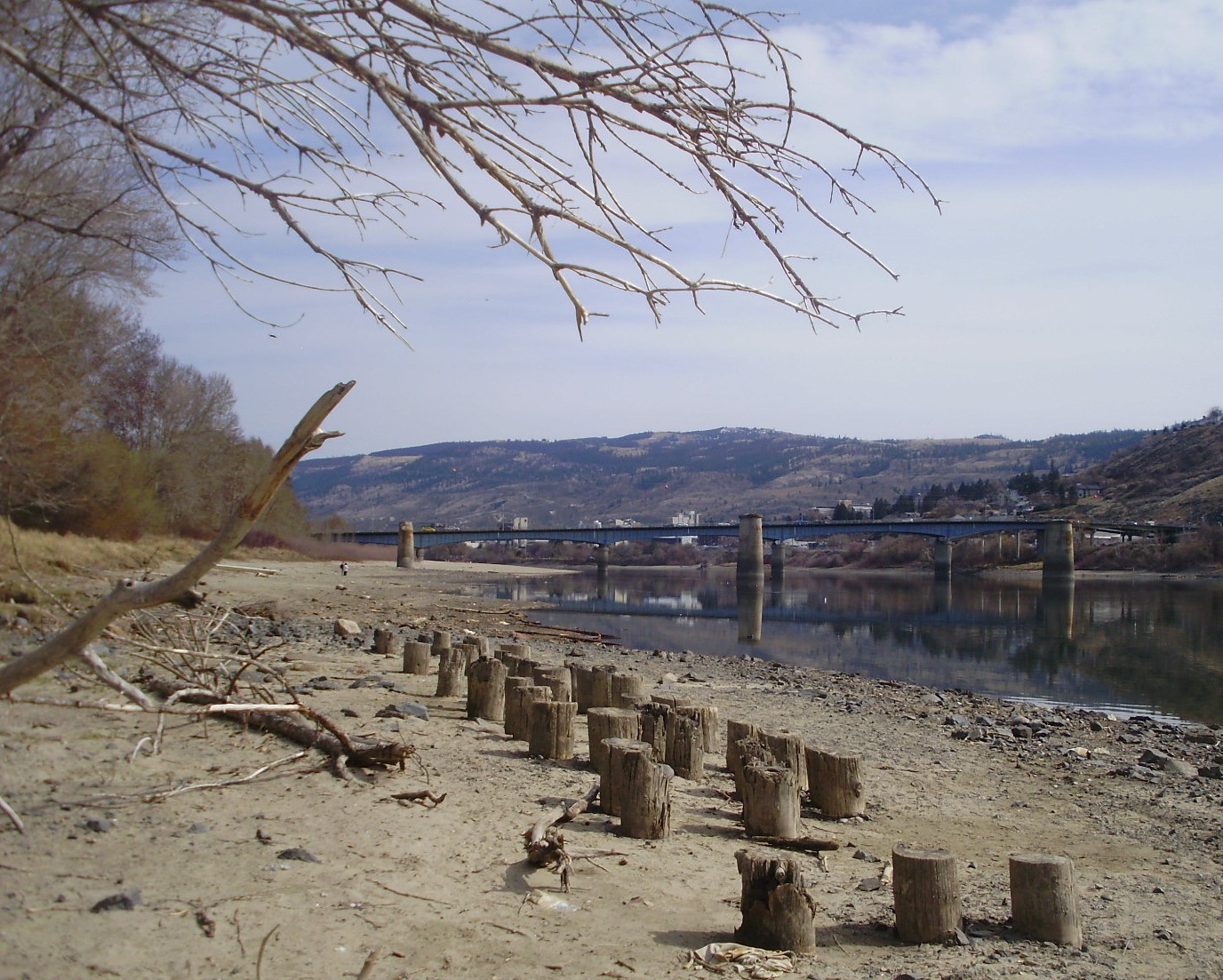 (With grateful acknowledgement of the excellent editing of this section by Barb Hicks, Professor Judy Lumby, Ken Favrholdt & Sharon Huston).

In 1923, the White Bridge was condemned. That year, a contract was awarded to William Greenlees of Vancouver to construct a second Thompson River Bridge just east of the white bridge. Twenty-five men began working on piles with wood transported by boat from Shuswap Lake and building concrete piers to support a steel superstructure with girders shipped by rail. The workforce was gradually expanded to 100 men. Delays were caused by disputes, lack of materials and an accident in 1924, when two men fell off the scaffolding into the river and drowned. 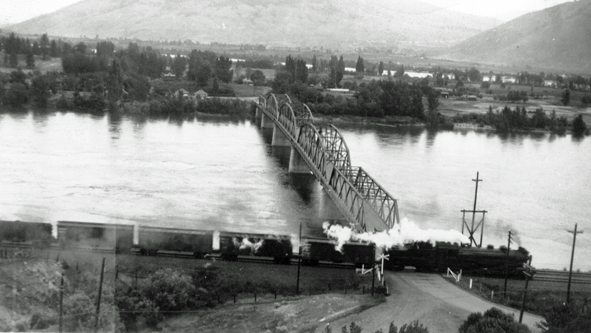 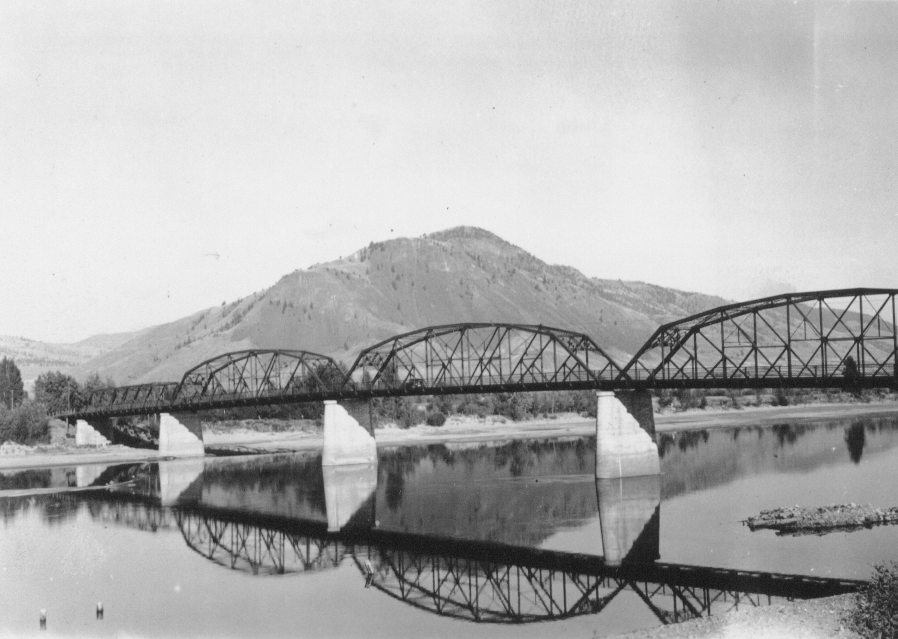 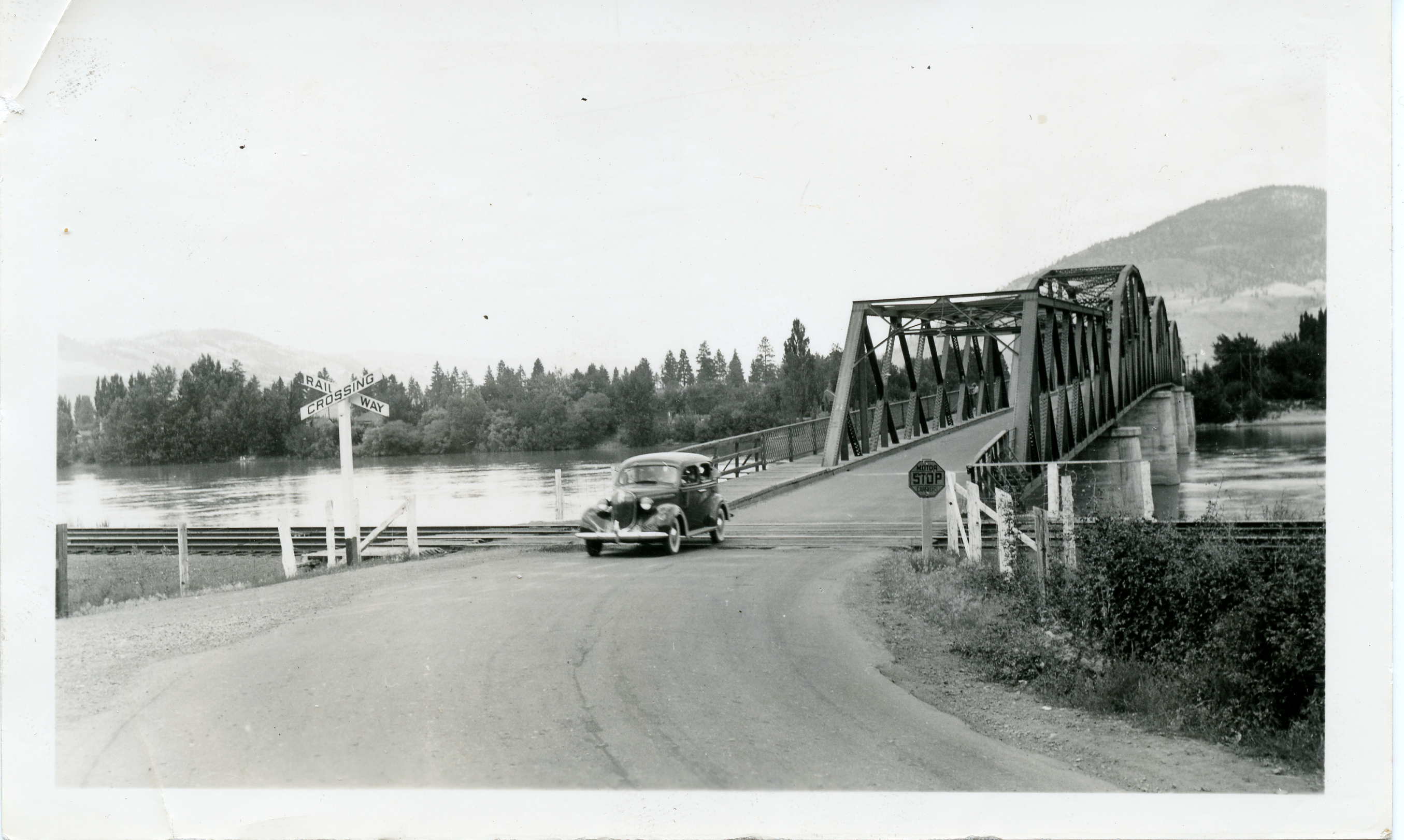 Despite these delays, the bridge opened in April 1925 at a final cost of $238,000.  With its black superstructure, it quickly became known as “The Black Bridge.”

This two lane bridge with a walking path on the west side provided not only improved transportation. It added both walking access to the south shore and a social dimension to the community as young mothers pushing prams and met others as they “walked the bridge.”

The CPR train track ran across the southern end of the bridge. With two “short” trains a day, this provided excitement and only short delays. People, especially children, enjoyed exchanging waves with the Engineer in the engine and the Brakeman in the Caboose as the train passed. 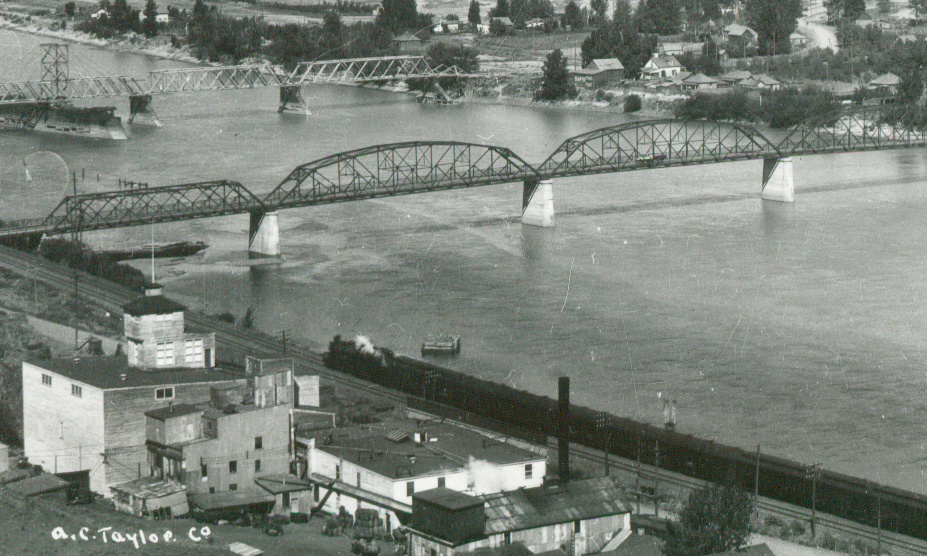 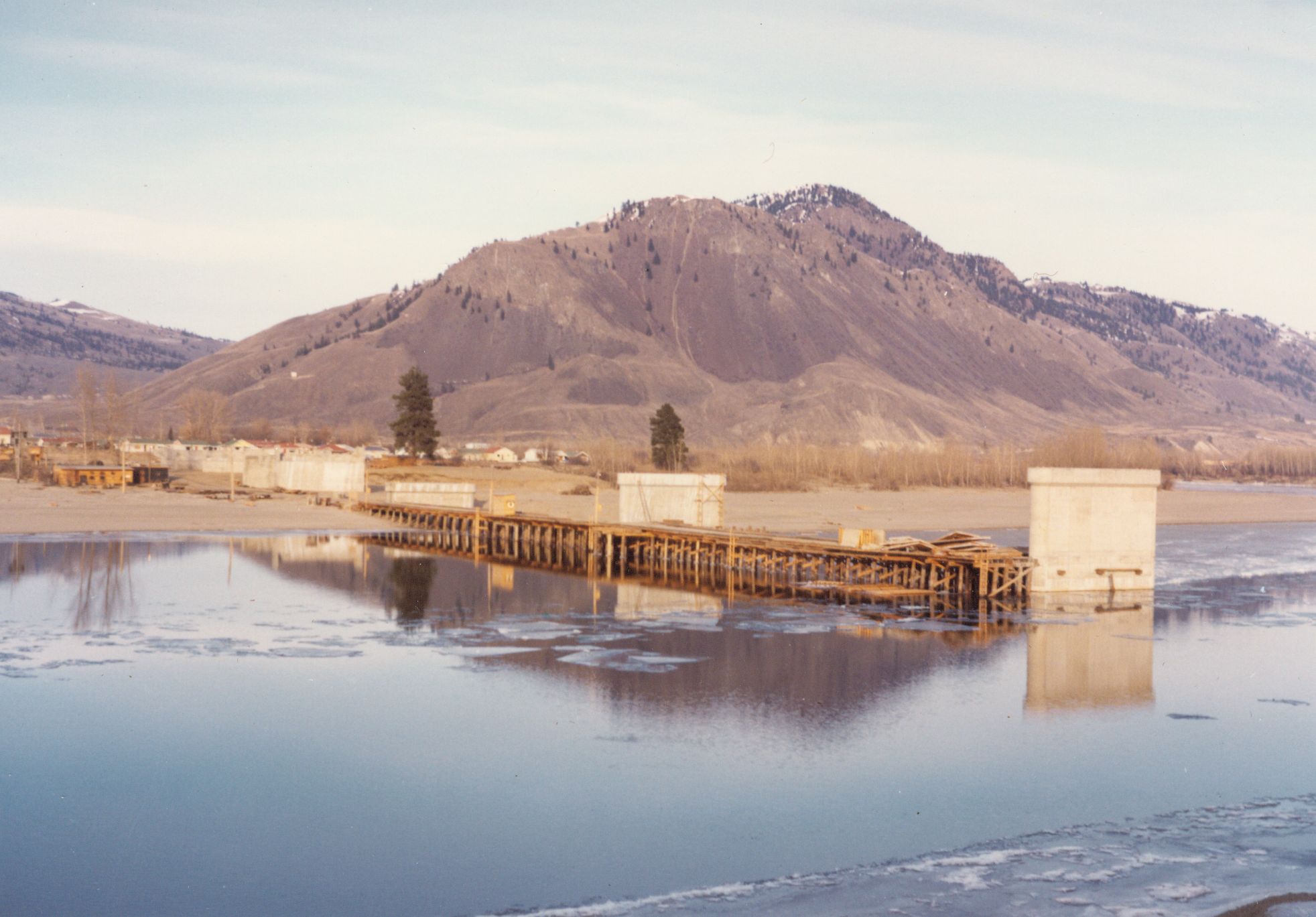 The condemned White Bridge co-existed with the Black Bridge until 1925-26, when it was dismantled. Wood from the White Bridge was used to build several houses along Royal Avenue providing 30 cm (12”) walls that kept these houses warm in winter and cool in summer. While additions or remodeling has occurred, some of these houses remain to this day.

An interesting note is that when opening this new Thompson River Bridge, the Honorable W.H. Sutherland, Minister of Public Works, stated it was “good for practically all time” comparing it to wooden bridges “with a short life-span”.