Researched and written by Dr. M. Colleen Stainton in consultation with Mike Webber, President of the Kamloops Golf & Country Club and appreciation for editing by Barb Hicks. Images reproduced with permission of the Kamloops Museum and Archives. Hover over image for photo credits, or see the list at the end of the article for the image notations in order of appearance.

This land, inhabited by the people of the Tk’emlúps te Secwépemc band of the Interior-Salish Secwépemc (Shuswap) nation for 10,000 years, is their unceded territory.

The Kamloops Golf & Country Club has not always been on the North Shore….

As Kamloops developed in the early 1900’s, so did its sports activity.  Competitive teams in hockey, polo, rodeo, football, bicycling, baseball, basketball, lacrosse, curling, and tennis were very active. Horse racing, hunting[1], cricket, fishing, and skating were common activities.  The Kamloops Athletic Club was formed in 1889. (Mary Balf, Kamloops, A History of the District up to 1914, Kamloops Museum, 1969).

Interest in golf began just before the declaration of WWI.[2]  In March 1914, a group of fifty residents gathered in Kamloops with the intent to organize and build a golf course for the enjoyment of the local residents.  The newly formed Club was allowed free use of land owned by Alfred W. Johnson. It was above and overlooked the west end of Kamloops on what was then named Merritt Rd.[3] (Mary Balf, Ibid) 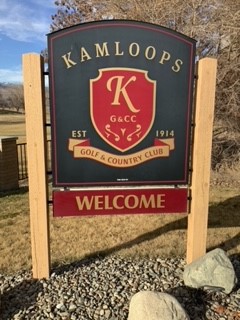 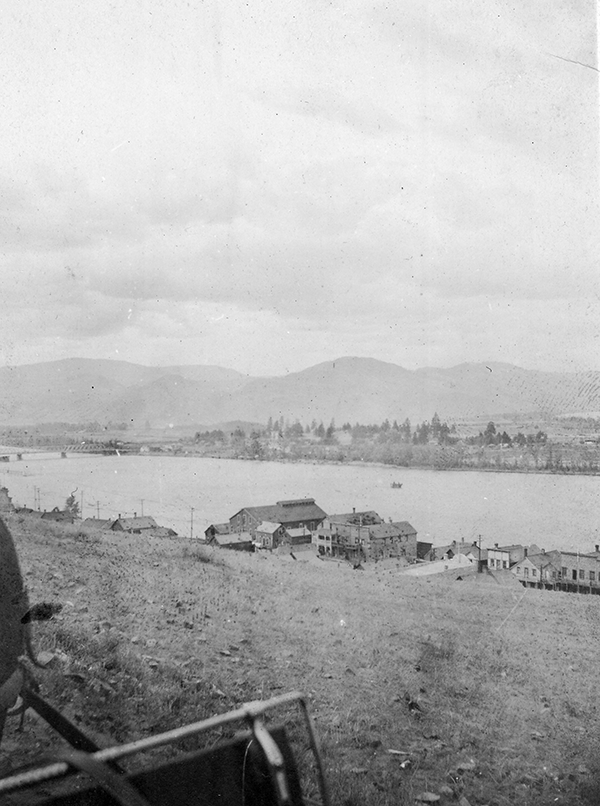 A.W. Johnson’s death in the war required the Club to lease land and relocate to land that is now the Hillside Cemetery.

Golf was very popular in Kamloops and the Club became a social centre. The Club’s dances became a highlight each year. By 1929, memberships and fees enabled the KGC to purchase the leased land. 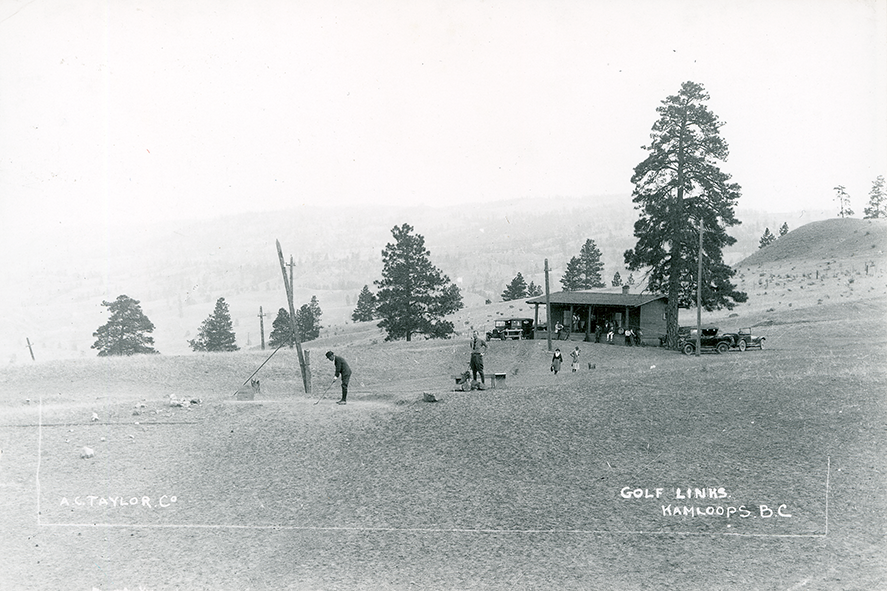 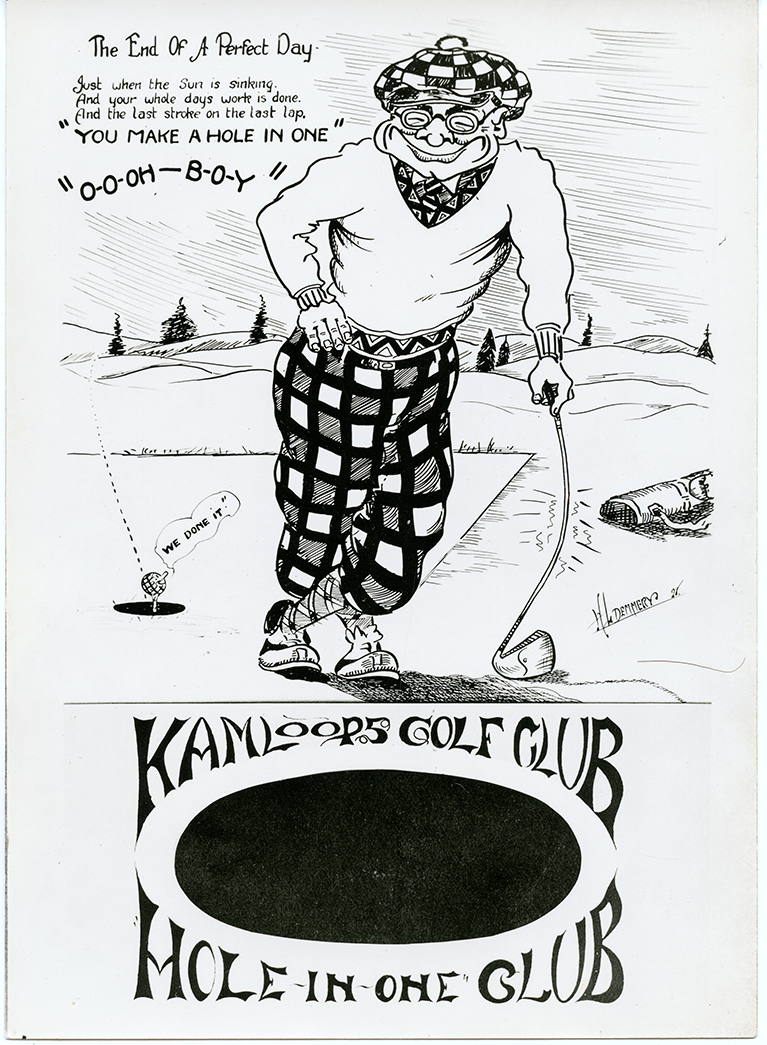 Expansion and Development on the North Shore

As the war was ending in 1945, the Royal Canadian Air Force closed its station at the Kamloops Airport and turned the airport over to the Department of Transport (DoT).[4]  In 1947, the DoT leased some of the airport property to the City of Kamloops.

Following the war, there was a huge increase in sports development in Kamloops.  Some of the returning troops had learned to golf in France and were delighted to find golf available. The KGC had outgrown the course and facilities.

This coincided with the City Council proposing the acquired airport land be developed as a golf course. During 1945-46, the KGC negotiated the sale of the hillside golf course to the City of Kamloops and also a 10 year lease of 171 acres of the former airport land with two buildings for a Club house and Golf lessons.

The draft lease included the City of Kamloops’ assistance in developing a nine-hole course with a sand green layout.  In April of 1950, the KGC exercised its option to buy the leased land at a price of $2800 (Kamloops Sentinel, June 28, 1950, p7).  The new setting motivated a change of name to The Kamloops Golf & Country Club in the spring of 1950.

In May 1950, with assistance from Dunc Sutherland, retired Pro from the Point Grey Golf Course, and Dave Black, Pro of Shaughnessy Golf Course, a grassed 18-hole golf course was designed and staked.

The Kamloops Sentinel, under the heading, First Nine Holes of New Golf Course Mapped Out, reported:  “Dunc Sutherland described the new piece of property recently purchased by the Club as ‘an opportunity of a lifetime’ for Kamloops to build an 18-hole course.  In fact, Sutherland was so taken with the stretch of land …that he was all for parceling it up and taking it to Vancouver. There he said it would amount to a small bonanza (Kamloops Sentinel, May 10, 1950, p1).

The two-day consultation concluded with a friendly round of golf with Ald. Affleck, Club President, and R.T.C. Poli Howard (Kamloops Sentinel, May 10, 1950, p1).  The Kamloops players won as described in the local newspaper:

“The Kamloops duo took turns at turning in good rounds. For the first nine, Bob Affleck blazed around the course and had all his shots working to perfection. He was especially good on the greens, sinking several long putts. For the second nine, it was Poli Howard who stepped out after playing a rather shaky game for the first round. He birdied the last two holes to win them for the Kamloops duo after the first seven had been halved. Affeck and Howard had things pretty much their own way for the first nine, winning seven holes, dropping one, and halving the others” (Kamloops Sentinel, May 12, 1950, p6) .

While the new site was being developed, the 300 KGC members continued to golf on the Hillside 9-hole course that was also being upgraded with irrigation.  Aluminum pipe was laid on the surface and powered by a 7-horse electric motor creating temporary watering system using overflow water by an arrangement with B.C. Fruitlands Irrigation. These pipes “ultimately will be included in the system serving the 18-hole course” (Kamloops Sentinel, June 28, 1950, p.7).

The cost of the total project including a Clubhouse was estimated at $30,000. First mortgage, 20 year term debentures of $100 were created. $5 interest would be paid annually and included the privileges of a member ($6 per year) thus, it was argued, created a return of 11%.  A concurrent drive began to increase the membership by another 100 members, who would also be “charter members.” The Executive closed this drive at 380.  Those not Charter Members would pay annual fees of: Men, $24; Women, $18; married couple, $30; and no initiation fee. Otherwise, initiation fees ranged from $12 to $100 in addition to annual dues (Kamloops Sentinel, June 28, 1950, p7).

It was originally thought that irrigation for the new course would come from the B.C. Fruitlands flume water system. However, The Dominion Range Experimental Station was permitted to run a water line across the east end of Fulton Field from the Thompson River to the KG&CC in 1951.  It was an irrigation system, requiring moving the pipes by hand twice a day.

Original Clubhouse and home of the Palmers (previously an airport building)

Rod Palmer became the first Golf Pro at the Club and served from 1952-1972. He assisted in both the design and execution of the layout of the new golf course.

While Rod was not a relation to Arnold Palmer, this did not stop the KGCC referring to their course as” a Palmer designed Golf Course” when playing matches with members of other courses in the area! 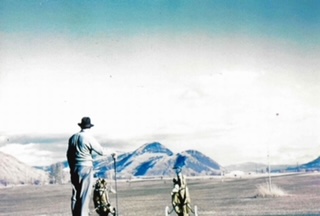 After some setbacks, a group of mainly volunteers built a new Clubhouse that opened on June 14, 1952.  About 500 trees were donated by the B.C. Forest Service and planted on the course.

On December 24, 1952, the status of the Kamloops Golf & Country Club (KGCC) was changed from a non-profit society to a corporation. 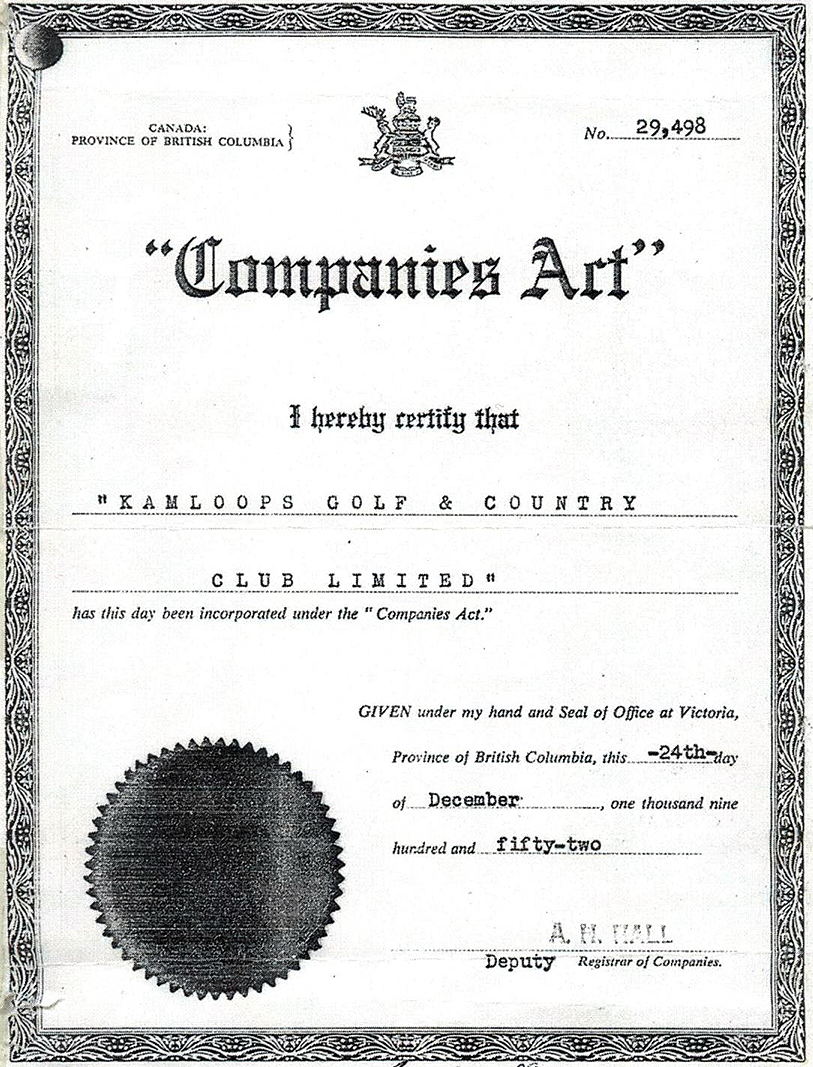 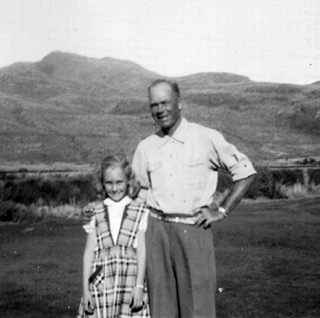 fn March of 1953, the KGCC sold a portion of their property to a Royalite Refinery operator from Calgary, Alberta,[6] This put the Club in a very secure financial position and made it possible to develop the first nine holes.   This aerial view shows the current airport and both the Kamloops Golf & Country Club and the Refinery. All of this area was the Kamloops Airport during WWII.

This aerial view shows the current Airport and both the Kamloops Gold and Country Club and the refinery. Al of this area was the Kamloops Airport during World War II. 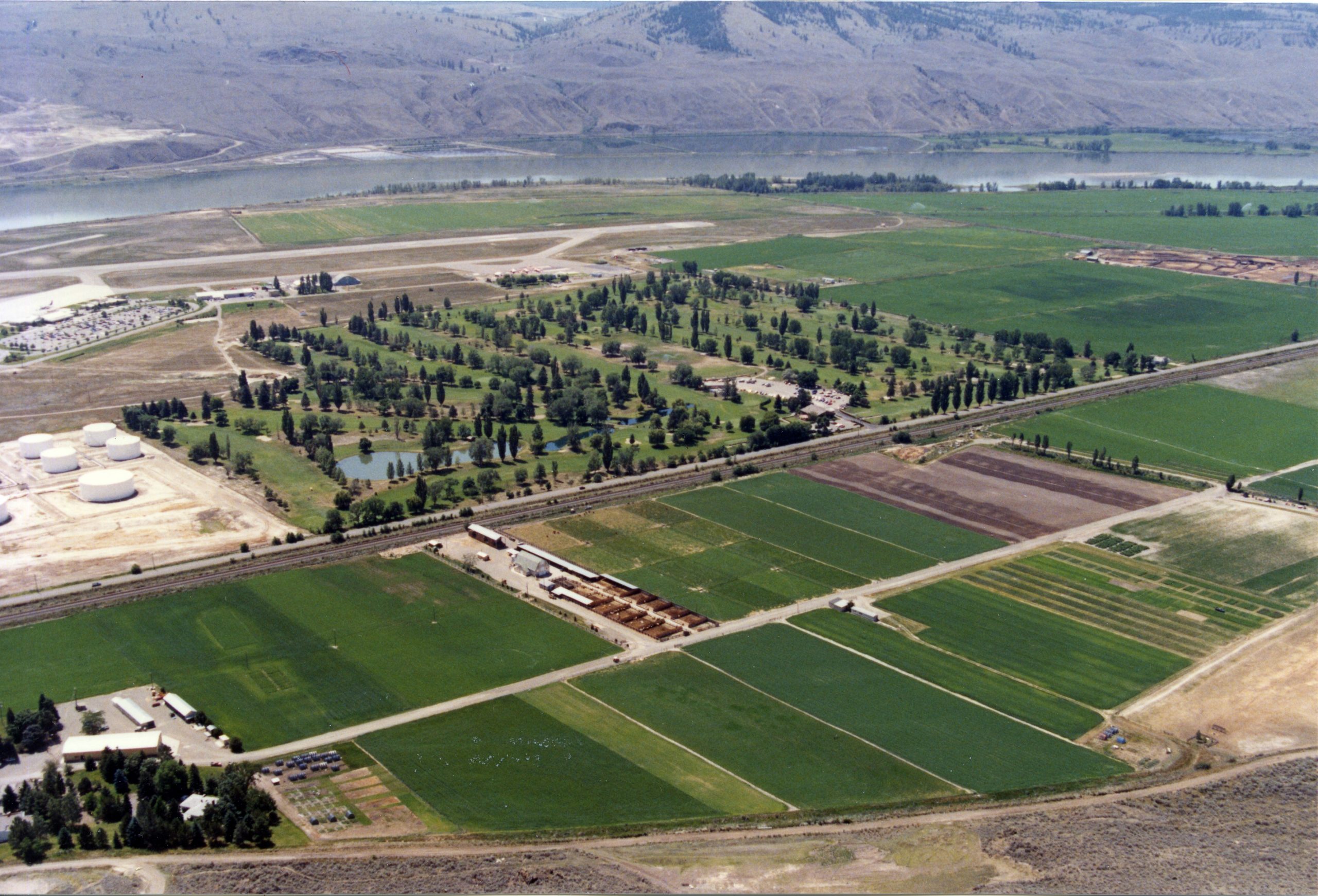 In 1967 the back nine was constructed to complete the eighteen-hole course. From 1967 to 2009, there were a number of minor enhancements but the basic course layout did not change.  The many trees grew to provide a nice canopy on hot summer days. Unfortunately, 138 trees succumbed to the pine beetle in the early 2000’s.

Major Remodelling of the Course:

In 2007, the Board of Directors contacted golf course architect Ted Locke to provide options to enhance the playing conditions on the golf courses. The goal was to better utilize existing space and the practice facility,

The planning included an ergonomic assessment of the golf course for irrigation, managing the effluent water source, plans for redesigning the fairways and rerouting of golf holes including the installation of new bent grass greens.

On September 7, 2009 the back nine was closed and the front nine followed on October 6, 2009. The back nine re-opened July 1, 2010 and the front nine followed on July 31, 2010. The bunkers were reshaped and the water hazards were redesigned. Strategically placed mounding was also added. This major renovation made the golf course more challenging while continuing to attract golfers with various skill levels. 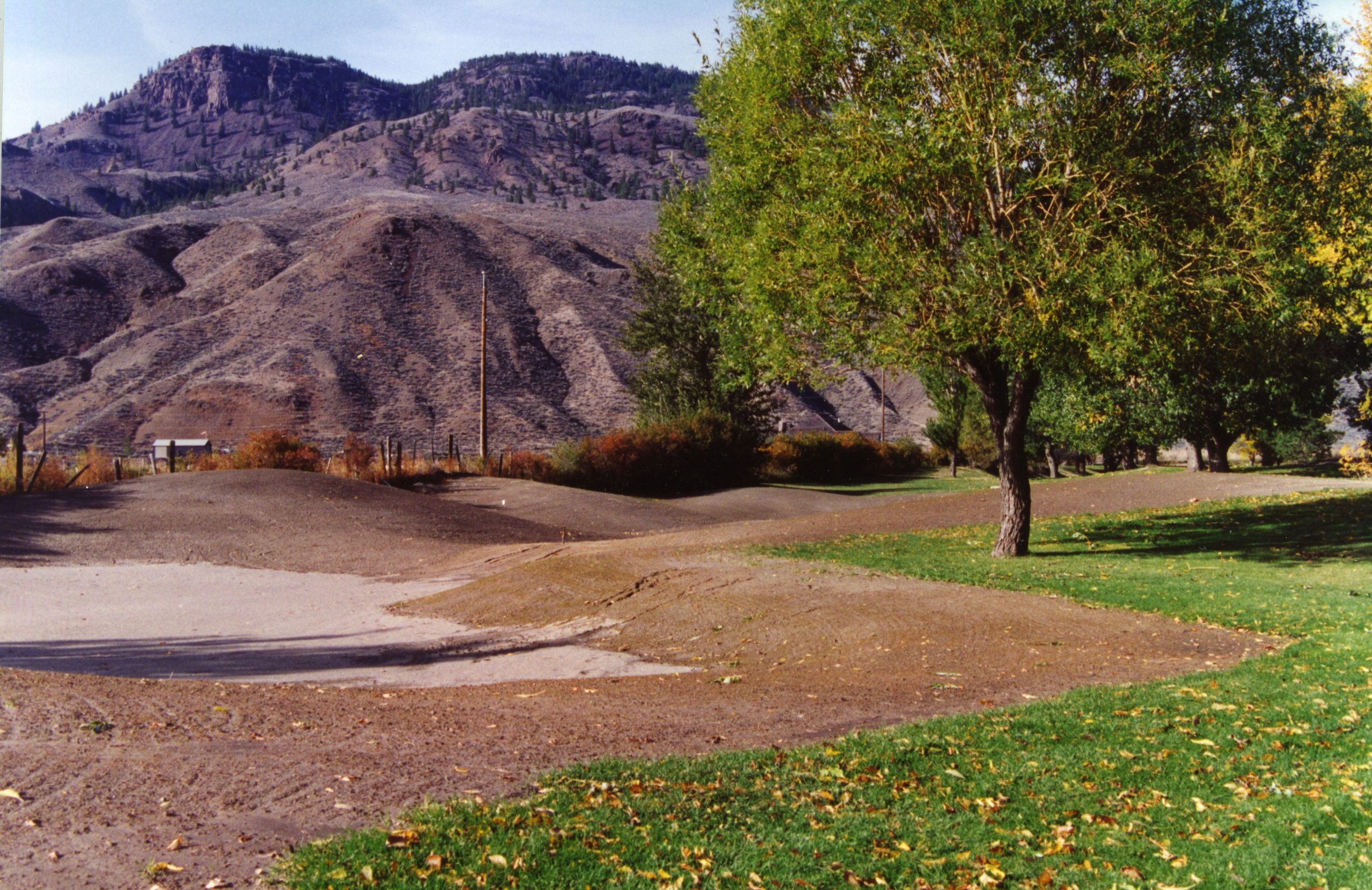 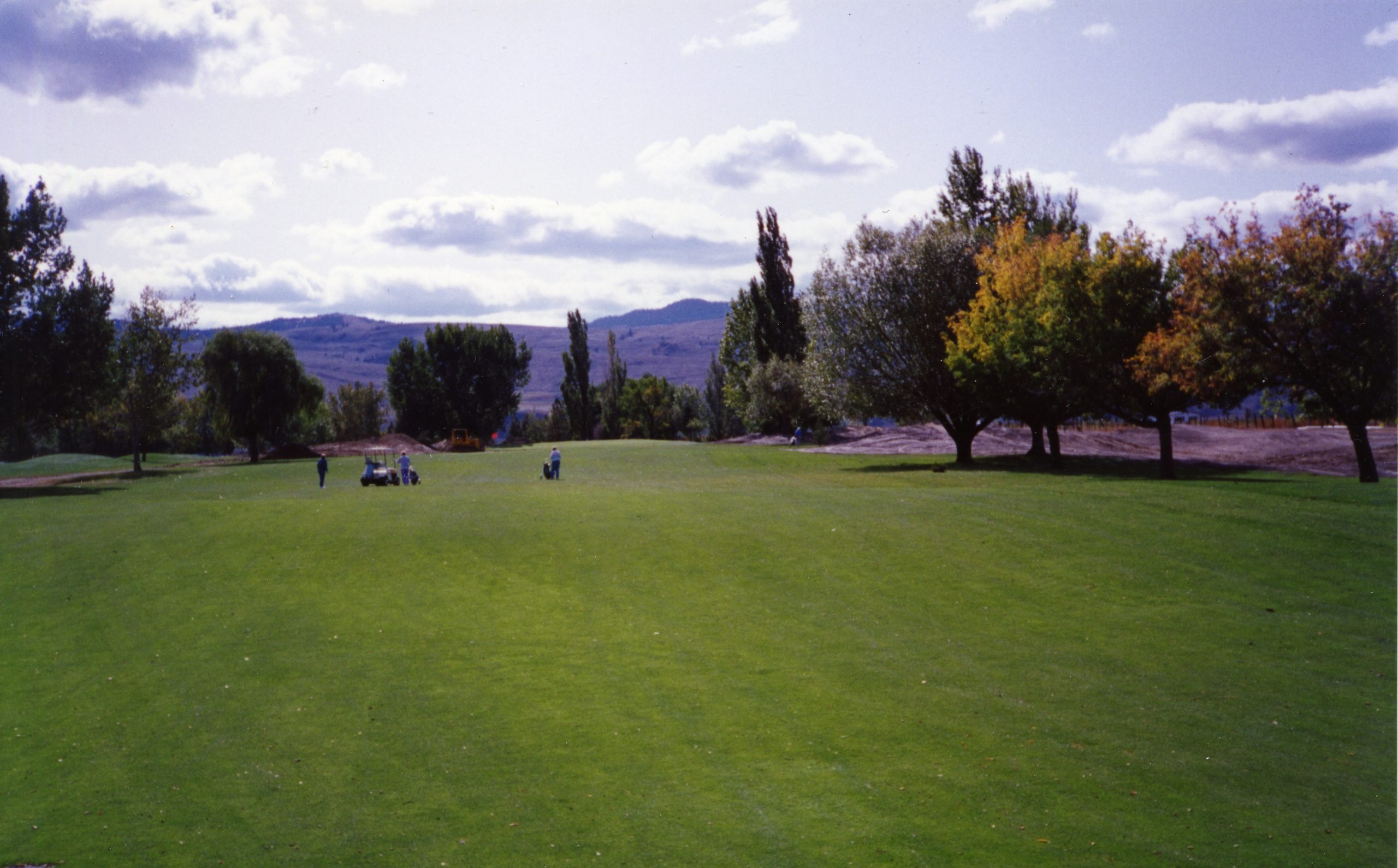 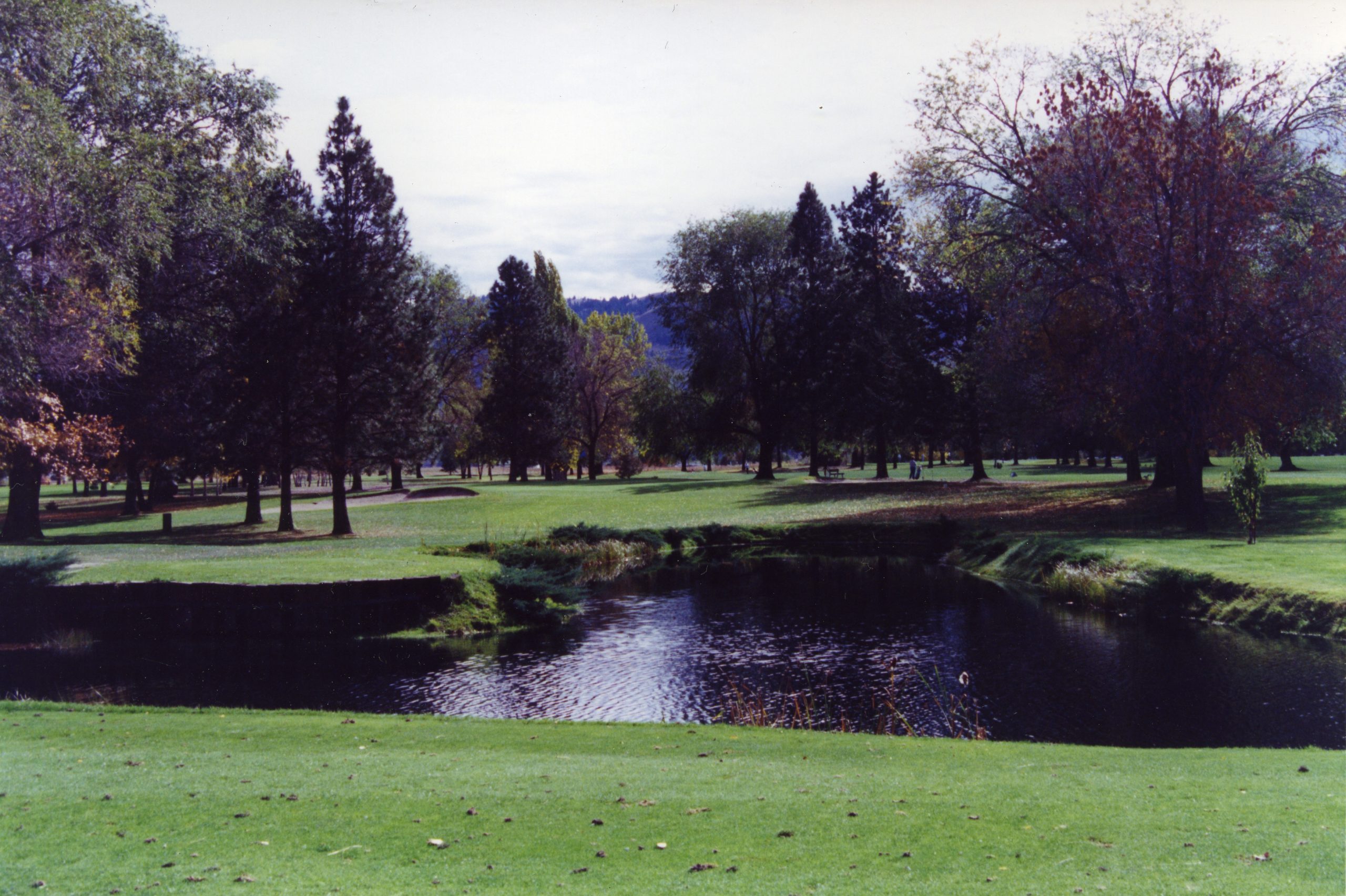 The current Kamloops Golf & Country Club is a par 72 Championship course that is a credit to its long history. It includes an 18-hole golf course, grass tee driving range, full service Pro Shop with five Golf Professionals and The Willows Restaurant.  The course is 6,700 yards long and the many mature trees increase the challenges including areas of shade and sunshine. Golfers often see an abundance of wildlife, as the area is home to many types of birds and deer.

The Kamloops Golf & Country Club is a semi-private, member owned facility. It welcomes the public to visit and use the facilities as guests.

A hole-by-hole view is available at   https://kamloopsgolfclub.com/golf-course/hole-by-hole/

[1] In the early 1900’s, Ed Brocklehurst, a farmer and orchardist, “imported a small pack of foxhounds with which he and his friends chased coyotes, although the dogs had little enthusiasm for the prickly pear cactus” (M. Balf,p.84).

[3] Currently south side of Hillside Cemetery on Notre Dame Drive

[4] This included a mile long runway and 13 buildings