This article written and researched by M. Colleen Stainton. Images reproduced with permission of the Kamloops Museum and Archives.Hover over image for photo credits, or see the list at the end of the article for the image notations in order of appearance.

By the 1950’s, automobile and train traffic had increased The Black Bridge had become inadequate and the train crossing was both inconvenient and dangerous. In 1959, construction began on the third bridge to have four lanes and a sidewalk. It was finished 2 years later at a cost of $3M, with 3.8 million pounds of steel sitting on concrete piers.

When halfway completed, the Kamloops Sentinel newspaper ran a contest to name the Bridge resulting in 500 entries 11 of which suggested “Overlanders,” the pioneers who canoed from Manitoba to Kamloops in1862. Joan Lyons won the $50 prize as her entry was the first to arrive at the newspaper office. 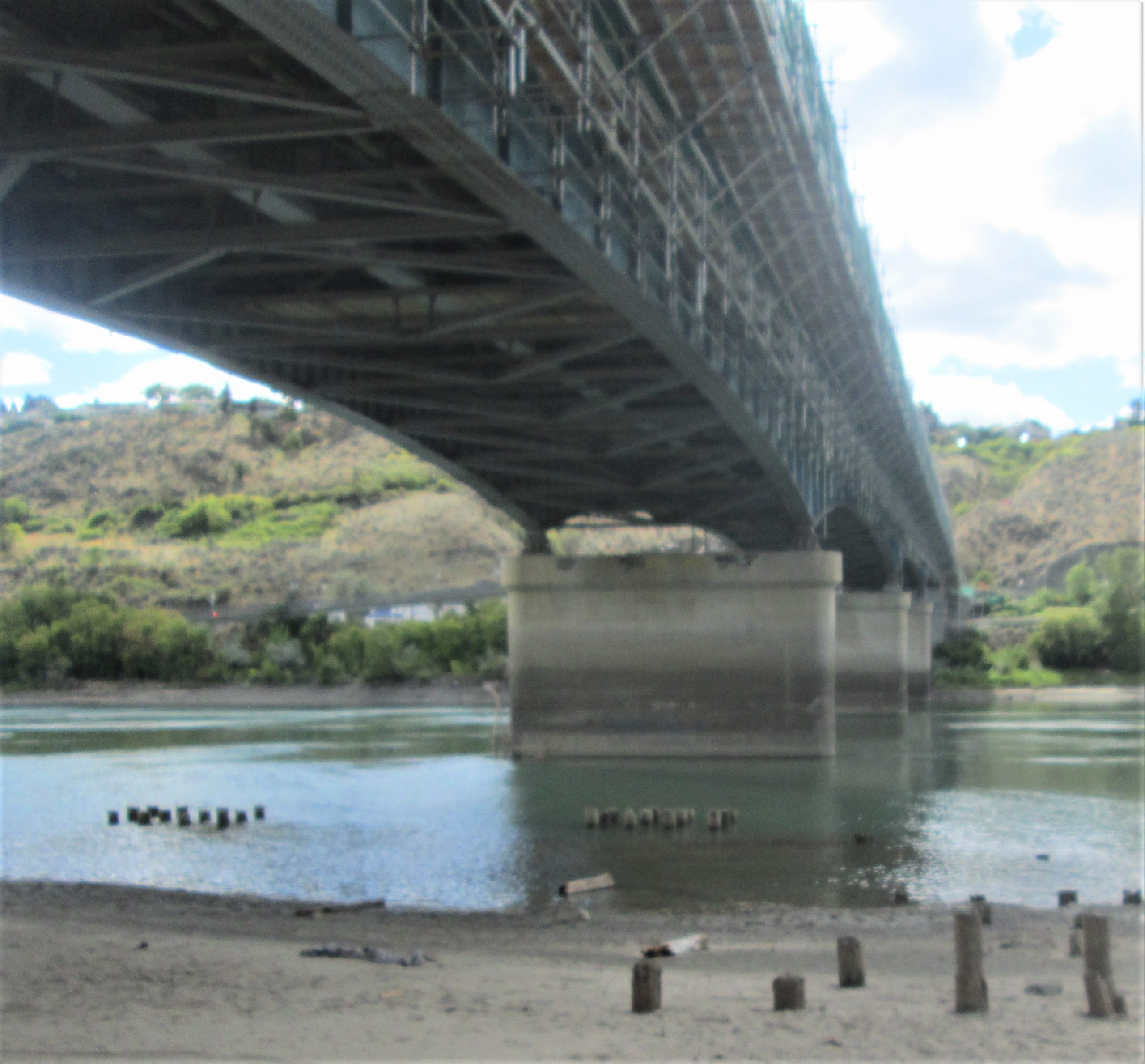 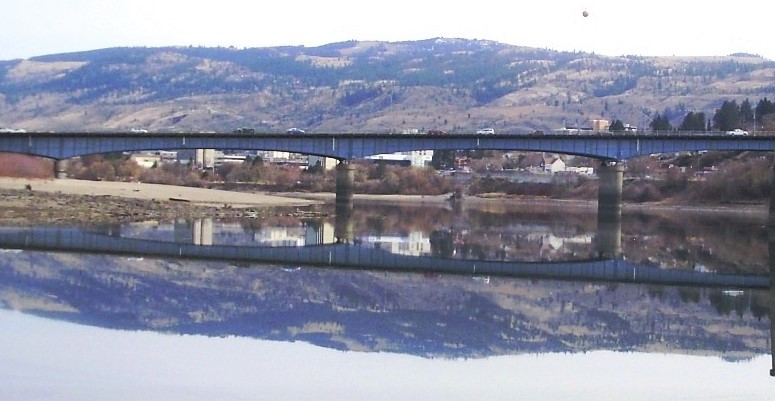 The bridge was opened on November 22, 1961. The incorrect name of “Overlander” was used for some time before being corrected to “Overlanders.”

The two obelisks at each end of the bridge were designed by Jack Akroyd of Vancouver who was inspired by the local Indigenous lands.  Foundations of fish weirs remain under the bridge.

Due to the blue colour of its steel understructure, this bridge is sometimes nicknamed, “The Blue Bridge.”

In 2005, without consultation, the City Council renamed the bridge “The Phil Gaglardi Bridge” to recognize the MLA and Highways Minister involved in the building who had objected to this suggestion during the contest. Public outcry quickly reversed this decision. 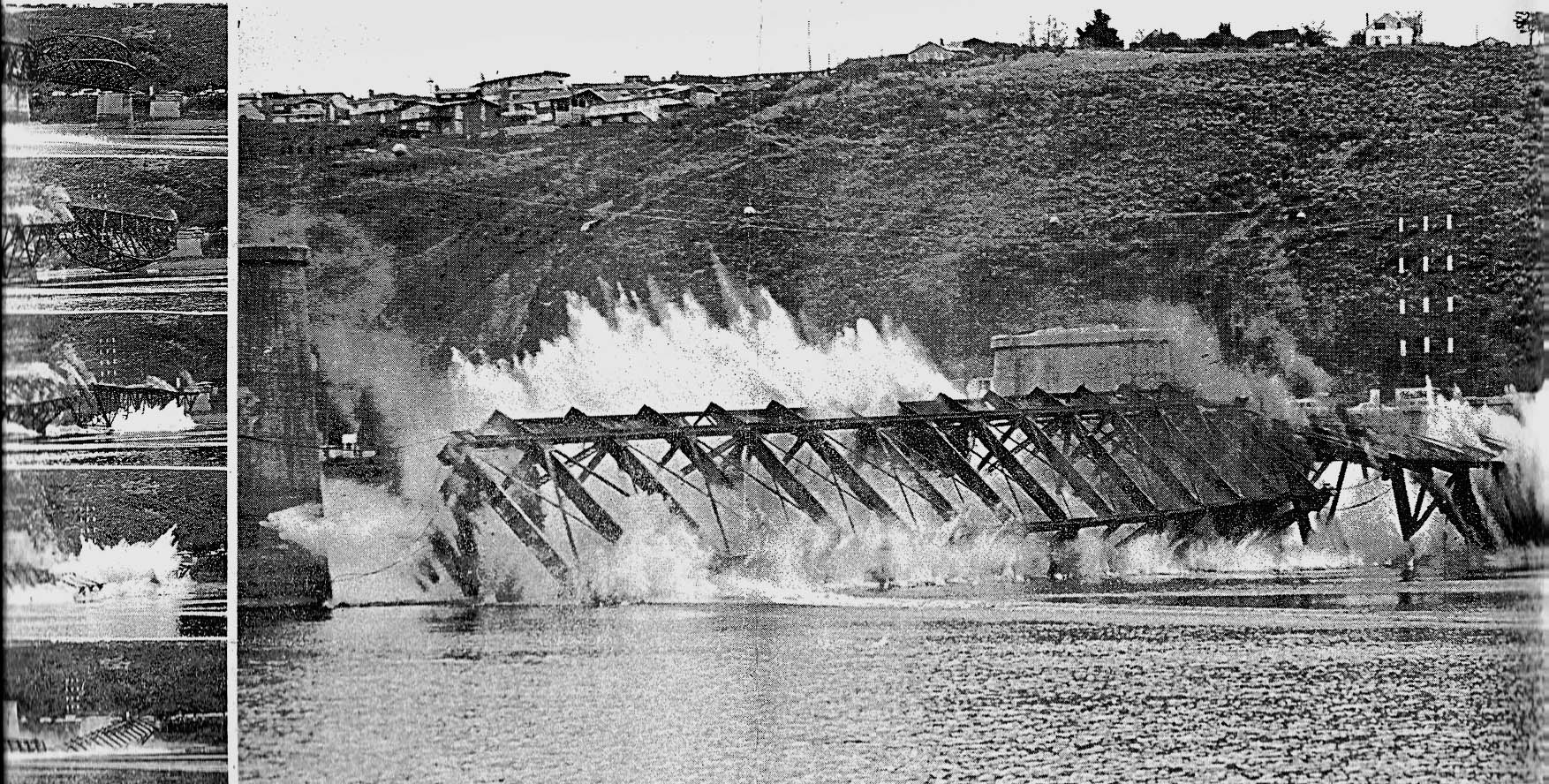 The Black Bridge closed and remained in place for a decade with much controversy occurring regarding its future. While structurally sound, the level rail crossing was considered unsafe. Plans to demolish changed from blowing up the piers to salvaging the steel spans.  In Nov 1972 cables were used to pull the steel spans into the river with a cable attached to a tug and skidded out of the water.
A cable snapped and one span toppled onto its side and had to be cut up. Other spans were transported by rail and installed elsewhere, e.g., Clearwater.  Plans to explode the concrete pylons at the end of salmon season were overruled by the Dept. of Fisheries and remain in place, providing a canvas for Blazer’s cheerleading and graffiti artists.
Bridges of Kamloops
Bridges Part Three: CN and Halston Bridges